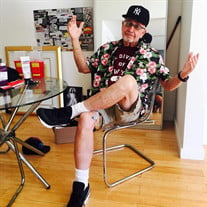 William Francis McCarthy III, Lance Corporal, United States Marine Corp. was born 3/24/42 in East Hartford, CT. He died peacefully with family—his many children and grandchildren--by his side in North Hollywood, CA. He spent his last years in Reseda & North Hollywood with his youngest son Andrew and his wife Dulce Gurrola. He went on long walks in Balboa Park and enjoyed the company of this grandchildren, Sophia and Ace. After a long battle with Myasthenia graves, he joined his beloved wife, Nelfa B. McCarthy in eternal peace on May 8th, 2021. Bill was a dependable & dutiful husband, father, brother, uncle and beloved friend to all who knew him. He was firmly planted to the earth working as a senior gardener and retired as a water utility foreman for the City of Los Angeles, Parks & Rec where he revolutionized irrigation throughout the park systems. He actively gardened the grounds of St.Gregory Nazienzen where he worked and worshipped for many years before retiring in the Philippines with his wife, Nellie. Bill was a rock to many. His older sister, Christine Pines and her family survives him as well as his living children: his oldest living son, Marcial Cable (and husband) as well as his oldest natural son, William F. McCarthy (wife Michelle & kids), Kathleen B. McCarthy (and her aunt, Eleanor); Teresita McCarthy (and partner Eileen) and Andrew P. McCarthy (wife Dulce and kids) deeply mourn him especially his smile, laughter and steady ways. Bill leaves a legacy of grown trees as well as grandchildren and great-grandchildren, William F. McCarthy V (his wife Alycea), Dylan John McCarthy (his , Meghan McCarthy; Andrew P. McCarthy, Jr., Sofia McCarthy, Ace Ayden McCarthy; Ricky B. McCarthy, Remington McCarthy, Regis McCarthy; Jocelyn P. Gautier; Jenny Pasilong Williams, Jacqueline Pasilong, Ryan Pasilong & Sadie Ruiz. "A husband, father and friend as steadfast as Gibraltar"

The family of William Francis McCarthy III created this Life Tributes page to make it easy to share your memories.