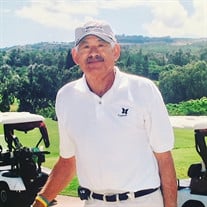 Komine, Raymond Joseph (83) of Cerritos, California passed away on Monday, January 8, 2018 at his home. He was born on Tuesday, June 5, 1934 in Hilo, Hawaii and lived the majority of his life in Southern California. Raymond was a graduate of Kastle High School in Kaneohe, Hawaii and a veteran of the Korean War. Survivors include his loving wife of 49 years, Renee Komine, his only child Felicia Komine Coffman (James) two grandchildren, Madison Downey, Preston Coffman and his only remaining twin sibling, Ronald Komine Sr. Raymond lead a very busy and active lifestyle. In 1968, his love of golf inspired him to found Hawaii Golfers of Orange County and he gave several years of service to the club as Vice President, Historian and Tournament Chair. The most notable years of his career were spent at St. Mary's Medical Center as a Food Service Director, where he took pride in offering top notch food choices to patients, staff members, nuns and priests who lived on the property. Raymond's passion for food also benefited his family, as he was always in the center of the kitchen making sure every part of the meal was cooked with love and perfect seasoning! Raymond had the heart of a servant, and always encouraged his family to take care of each other no matter what the circumstance. He was a quiet, humble giant who was respected by all who knew him. However, his greatest joys in life were found in his family. Their most precious memories are of time spent together on the golf course, spending time with his daughter, Felicia and son in law James and being an active grandfather to his grandchildren, Madison and Preston. Raymond's family meant the world to him. He was always keeping himself busy with things to fix, items to organize and meals to cook. And his family always, always, always wanted him around! He will be greatly missed. The family will be celebrating his life on Saturday, February 3, 2018. Service will be at Holy Family Catholic Church 18708 Clarkdale Ave., Artesia CA 90701 at 10:30 AM. Reception will be at Rush Park 3021 Blume Dr. Rossmoor CA 90720 from 1:00 PM to 4:00 PM. In lieu of flower, donations may be made to gf.me/u/ggypc6

Komine, Raymond Joseph (83) of Cerritos, California passed away on Monday, January 8, 2018 at his home. He was born on Tuesday, June 5, 1934 in Hilo, Hawaii and lived the majority of his life in Southern California. Raymond was a graduate... View Obituary & Service Information

The family of Mr. Raymond Joseph Komine created this Life Tributes page to make it easy to share your memories.

Send flowers to the Komine family.