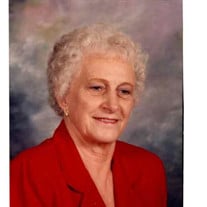 Barnard, Levanche (Vanderburg) - dear Mom, Grandma, Great-Grandma. Wife, Sister, Aunt, and Friend - went to be with her Lord and Savior on September 28, 2019 at the age of 86. A viewing will take place at Emmanuel Reformed Church (15941 Virginia Ave., Paramount, California, 90723) from 8:30 AM to 10:30 AM on Friday, October 11, 2019. A memorial service will be held also at Emmanuel Reformed Church on Friday, October 11, 2019 at 12:00 Noon, with a luncheon to follow in the Fellowship Hall. Levanche Vanderburg was born on a farm on Edgerton, Minnesota on February 17, 1933 to Hank and Madalene Vanderburg, the third of fifteen children. Inexplicably, Levanche never once asked about the origins of her first name - not where it came from, nor why her parents chose to give it to her. Her unique and downright unusual name however, would prove to be a fitting choice for a quirky, friendly, and community-minded woman who challenged conventions throughout her life. Levanche graduated from Pipestone, Minnesota in 1951. During her senior year, she worked at Pipestone's Eagle Cafe, after school and until closing time. This marked one of the unique things about Levanche - she always had a job. Later on, also in 1951, the entire Vanderburg family moved to Bellflower, California. Shockingly - because who would choose to do this - Levanche subsequently returned to Minnesota for one year, leaving her family in California. She worked at the telephone office in Woodstock, Minnesota during this time. Levanche eventually returned to California in 1953, where - due in part to her lovely handwriting - she got a job at United California Bank (UCB). In her free time, she was an avid roller skater, taking the bus with friends from Bellflower to rinks in Long Beach several times a week. It was during this period that Levanche met her future husband, Charlie Barnard, a Texan who was serving in the Navy, on a blind double-date. Levanche married Charlie on February 23, 1955 in Clayton, New Mexico. "I was going to be a Medical Missionary, but God had other plans! I met a handsome Texan and got married instead," she wrote in her journal. The couple and their children Jan (Janet), Mike (Michael), Lori, and J.L. (Charlie) - lived in New Mexico and in Texas, but mostly they lived in Paramount, California on Orizaba Avenue. Levanche became a member of Emmanuel Reformed Church in 1969. She'd taught Sunday School in Minnesota, and true to her nature, was enthusiastic about getting involved in this new community. She became the coordinator of Women's Ministries and was actively involved in Emmanuel's "Lookin' Good" program which worked to repair and support the neglected parts of Paramount and Compton. She was a prayer warrior for, mentor to, and loyal friend of many, many people. And though she'd had a longstanding and developed career in banking, her favorite job of all was becoming the Assistant Manager of Affordable Treasures, a charitable thrift store benefiting many community services. She began working there after she "retired" and stayed for eleven years. In addition to her brothers, sisters and parents, who remained an integral part of her entire life, Levanche had four children, twelve grandchildren, and seven great-grandchildren. She is preceded in death by her husband of forty years, Charlie Barnard, who passed away in 1996 and her grandson, Justin Derik Barnard who was taken in 2005. Levanche Barnard's favorite holiday was Thanksgiving, and - though she lived in California most of her life and loved traveling to Hawaii - she never learned to swim. She really did have lovely handwriting and was known for her impeccable thrifted pantsuits, collections of everything, and quietly feisty one-liners. We're really going to miss her. "My plot is paid for, my salvation is secure. My Master is Jesus, of that I am sure." Levanche Barnard (May 4, 2014)

Barnard, Levanche (Vanderburg) - dear Mom, Grandma, Great-Grandma. Wife, Sister, Aunt, and Friend - went to be with her Lord and Savior on September 28, 2019 at the age of 86. A viewing will take place at Emmanuel Reformed Church (15941 Virginia... View Obituary & Service Information

The family of Mrs. Levanche (Vanderburg) Barnard created this Life Tributes page to make it easy to share your memories.

Send flowers to the Barnard family.