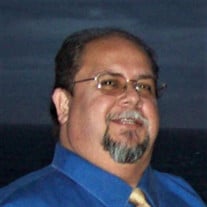 Harold C. Carman June 30, 1959 - March 26, 2020 Harold C. Carman, a 37 year resident of Bellflower, CA, passed away on March 26, 2020 at Torrance Memorial Hospital, surrounded by his family. Harold was born June 30, 1959 in Los Angeles, CA. He grew up in Lynwood, CA and graduated from Lynwood High School in 1977. He attended California State University of Long Beach, studied Business Administration and joined the Rowing Team (Crew). Harold excelled at anything he put his mind to and it never occurred to him that he couldn't or shouldn't try something that he wanted to do. Rowing was an example of something he was very passionate about that most would not picture him being successful at.....most crewman were nearly a foot taller than him. This made it a bit comical to watch as he joined an eight-man crew that carried the boat on their shoulders to the water, and him on his tippy toes, but that didn't bother him. Harold settled in as a very successful single or double crewman and soon qualified for the 1980 Olympic Rowing Team. In 1979, Harold married his high school sweetheart, Michelle. They settled in Bellflower in 1982, where together they raised their 5 children. Harold was a devoted husband and father who believed in being active in his community and in his children's education. He consistently looked for ways to give of his time and talents and, as an avid, lifelong music enthusiast, felt honored when he was invited to become a member of the Papal Choir and sing for the Los Angeles Pastoral Visit of Pope John Paul II in 1987. Harold was very active in the PTA, participating in talent show skits, showing up during the school day dressed as a clown, and becoming one of the first male PTA presidents. He was later appointed to the Bellflower City Traffic Commission and served as an elected Governing Board Member for Bellflower Unified School District from 1991 to 2001. Harold worked for the California Department of Motor Vehicles and in August of 2019, retired after 31 years serving the public. He has always been known by his employees as a caring, fun and mentoring boss. Of all of his attributes, Harold is most likely known for his sense of humor and fun-loving spirit. In the workplace, he constantly strived to create a spirit of comradery and had a strong sense of duty to his job and employees. While he could be all business one minute, he could then have a room of executives laughing uncontrollably the next. Harold was as well known for the high performance of his DMV office as he was for his antics on the work floor. He kept his employees laughing by "whooshing" with his arms up like Superman or riding his broom horse around the office to the theme of Bonanza. To all who encountered him, Harold quickly became known for his quick wit, humor and friendliness. For those that know him as family, friend, peer, employee or, boss, he was also a pillar of strength, full of generosity, compassion, support and love. The legacy of his laughter and the ability to make others laugh will live on for many generations. He was preceded in death by his parents, Harrel C. Carman and Concepcion (Connie) Sametier Carman. He is survived by his wife and best friend of 41 years, Michelle Carman; children, Mary Lynn (Randy) Reza, Harrel (Julianne) Carman, Benjamin Carman, Samantha Carman, Nicholas (Kathy) Carman; grandchildren, Randy Jr., Elizabeth, Joseph, Andrew, Aaron, Katherine, Chase, Aaliyah and Oliver; and his sister Sheila Stark. Funeral Services will be private,

The family of Mr. Harold C. Carman created this Life Tributes page to make it easy to share your memories.

Send flowers to the Carman family.