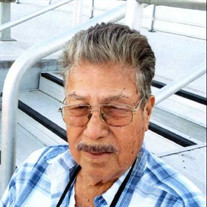 Jaime, Frank (83) of Artesia, California passed away peacefully on September 20, 2019 at his home. He worked for the United States Post Office for 30 years. He love sports, cars, sightseeing and adventuring to new places. He will be missed... View Obituary & Service Information

The family of Mr. Frank Jaime created this Life Tributes page to make it easy to share your memories.

Send flowers to the Jaime family.